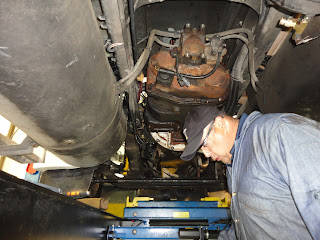 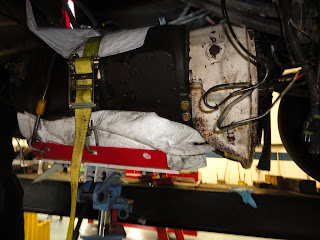 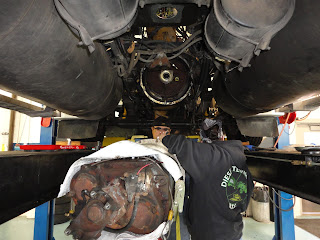 It wasn't to hard getting the transmission out. Putting it back in was a different story. Lining everything up so that the input shaft sides right in wasn't to hard. When to got to getting the fork over the throwout bear, things got a little tricky. It took us a while to get the fork over, but we got it. Later we were told that there was an easier way, by our teacher, to get the clutch assembly and transmission in all in one bang. That was to put the clutch assembly on to the input shaft, before installing the transmission. Once the transmission is mounted on, you can bolt down the clutch through a hole in the bottom of the bellhousing. 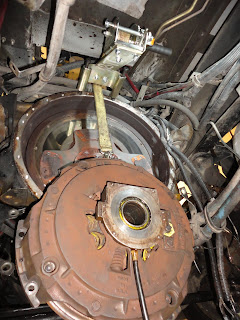 Here is a fancy tool called the "Clutchmule". It worked pretty good getting the 100, or so, pound clutch assembly down. 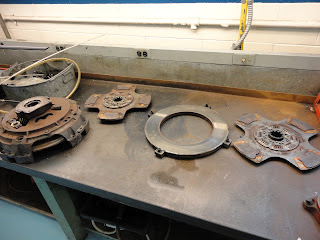 So these clutch is a double disc clutch. This provieds more surface area for the clutch to grab onto. 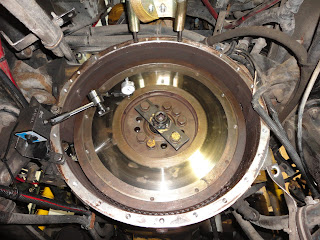 We didn't know how to turn over the engine, so we made a tool as you can see bolted to the flywheel. the problem with it is that you can't gett the pilot bearing bore runnout. It was also hard to get the houseing ID and face runnout as well. Later we find out that there is a tool for turning over the engine. 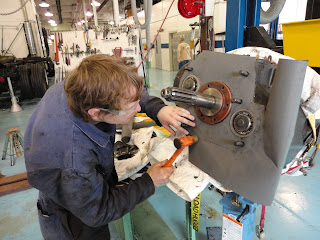 Here I learned how to cut out a gasket useing a small hamer. With light taps around the edges, gasket cut to the shape the gasket will cover. 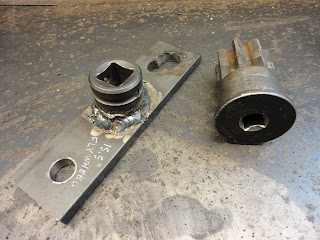 Again here is the tool, on the left, we made to turn the flywheel. On the right is the official tool to use. It would have made things a lot easier.